This event is a collaboration between the MCA, the Chicago Humanities Festival, and Northwestern University.

Join us for a conversation with Rick Lowe, one of the foremost thinkers on reimagining public art.

For artist and MacArthur Fellow Rick Lowe, art doesn’t only hang on walls in museums—art is all around us. Art is street murals celebrating Black-owned businesses. Art is the Project Row Houses in Houston’s historic Third Ward. Art is the way we act as members of our communities. In this special event with the MCA, CHF, and Northwestern University, Lowe reflects on community-based creative practices and the power of art to remake our public lives.

This program is held at Northwestern University’s Norris Student Center in the Louis Room.

This Dialogue presentation is organized by Daniel Atkinson, Manager of Learning, Adult Interpretive Programs, and Otez Gary, Curatorial Assistant, in collaboration with the Chicago Humanities Festival. 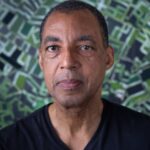 Generous support is provided by Lois and Steve Eisen and The Eisen Family Foundation, Caryn and King Harris, and D. Elizabeth Price.